You may want to hurry, hurry hard down to the Minden Curling Club this summer to check out its new features.

The club, located at 50 Prentice St., has new amenities which are transforming it from a mainly winter-time facility to an all-year-long centre.

The centre has a new indoor shuffleboard, a new pickleball court and is now putting the finishing touches on a new carpet bowling field.

“It’s going to be great for the community,” said club president Robert Peacock.

The renovations began after the club received a grant for just over $20,000 from the New Horizons for Seniors Program. The program is run by the federal government and is intended for “projects that make a difference in the lives of seniors and in their communities.”

Peacock is excited about the new features because he believes many seniors in the community have been cooped up in small apartments for too long, as a result of the pandemic. With a hopefully normal summer upon us, he believes there will be a strong demand for recreational services, particularly among seniors wanting to get out.

Shuffleboard is a popular sport among seniors; it involves sliding weighted disks toward a target. Pickleball is a growing sport that is like tennis, but played on a smaller court to accommodate seniors. Carpet bowling is, essentially, lawn bowling, but played on an artificial turf.

The club plans on unveiling the new features at an open house event, scheduled from 3 p.m. to 5 p.m. on Wednesday, June 29.

The club will then officially open for the season on Monday, July 4. It will remain open on weekdays through the summer from 9 a.m. to 2 p.m. and Peacock says that there’s a plan to have the club be open for additional hours on Wednesday and Thursday evenings this year.

The club has several membership options, which range in price from $500, for those who want to curl several times a week, to as low as $35 for a “social membership” to participate in special events.

Although the grant money it received was intended to make the club more attractive to seniors, Peacock stressed that people of any age can be members. The club has 150 members now, which is slightly below normal, likely owning to the pandemic. Peacock believes the membership will soon get up to 200 or beyond.

The club is also getting ready to run the Boshkung Social Cornhole League. Cornhole is a sport in which participants throw bean bags towards a hole on an angled board.

The league would run from July 6 to Sept. 7. Participants would play as individuals in a round-robin format. A registration session for the league takes place at the club on June 29 from 6:30 to 9:30 p.m.

Alleway and Gervais lead the…

The Highlands are alive with… 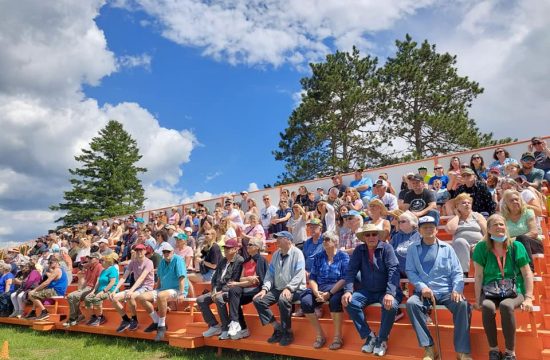